Close
4/20 is like Christmas and New Year's Eve rolled into one 125 posts over the years and this is my first trademark tag a href all lawyers are bitches so maybe I should have used "bitchslap" All your internets belong to us apple is the new microsoft for lawsuits arrrrr pirates back in paint it black Basstral? Assell? BLOCK THIS distinct society Do ACTA accordingly domain name this! don't you...forget about me downloading elect me for king of the internet excerpt this facebook FFS get some first-run movies Netflix free speech ain't always free Happy Holidays kidzzzz! How do I not have a "news" tag? I don't have a European internet law category I don't have a hockey tag? I got yer constitution right here pal i hope you notice this tag In Canada ISP stands for Internet Suckiness Providers I need to be regulated I saw Zuckerberg at SXSW once and it wasn't pretty Is fair dealing really fair? is my kill bill series a violation of tarantino's copyright? lock up all the violent criminals me me me micro$oft mmm mashed potatoes oh say can you crtc PIPASOPA_OPA! privacy private parts Protecting children good spying bad put it in neutral rogers v bell: which is worse Roos and koalas and wallabees oh my! see_are_tee_see? serve me... a beverage spam spam spam eggs sausage and spam surveil this Teh Google will outlive us all text this The Commish The George Laraque Teksavvy ad is the greatest commercial ever the law is the law the music in Atari was never copyrightable The Pacific is huuuuuuge the Revolution will be televised... on Periscope This is as close as we'll get to Sexy Friday around here this may be my snarkiest post ever those who deny freedom to others deserve it not for themselves Throttle this Bell Throttle this Rogers torrent(-ial downpour of copyright violation) Tough to stay Anonymous forever but these guys have a real chance trademarks blech trade this tRump loves Adderall tweet this welcome whatever you do don't cross the streams What happens online in Vegas doesn't stay there why internet law is important to YOU wide world of interwebs Yahooooooooo you can use my personal info I really don't care your privacy is not yours YouTube is my favourite tube of all the intertubes Zoom on PBS was a big part of my childhood 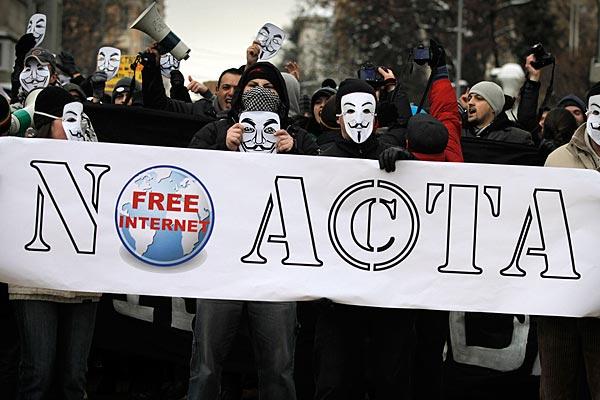 If you have been without an internet connection for the last couple of years you may not have heard of ACTA, and the resultant protests in 200 European cities in February last year, as seen in the pic at the top of this post. So for a quick backgrounder, go read Wikipedia. Holy shit that’s a long article. That tells you how important it is! In brief, ACTA is a multinational treaty, designed to standardize intellectual property laws around the world. Good fucking luck with that. Canada signed ACTA but has not ratified it, and ACTA is not even in force, meaning it is not the law of the land.

So what really got Europe’s panties in a bunch (the Euro Parliament rejected ACTA in July last year) for the most part was the fact that ACTA has all sorts of powers with respect to enforcing copyright on the internet. Those powers could have had all sorts of consequences on freedom of expression and privacy and all that good stuff we love on the interwebz. Here, from the BBC report on the protests linked above:

Well that totally blows. Had I seen that I would have been out protesting too, and even sort of supported those crazy Anonymous actions (not that I support anything illegal mind you, [cough]). In fact, ACTA contains an entire section, Section 5, entitled Enforcement of Intellectual Property Rights in the Digital Environment. I have bolded it and italicized it to tell you how important that was. Let’s take a look at some of the provisions of Section 5:

1. Each Party shall ensure that enforcement procedures, to the extent set forth in Sections 2 (Civil Enforcement) and 4 (Criminal Enforcement), are available under its law so as to permit effective action against an act of infringement of intellectual property rights which takes place in the digital environment

So basically making internet piracy an actual crime. Got it. That’s bad. Next:

4. A Party may provide, in accordance with its laws and regulations, its competent authorities with the authority to order an online service provider to disclose expeditiously to a right holder information sufficient to identify a subscriber whose account was allegedly used for infringement

Ahhhh, ISPs turning over subscriber info without any sort of legal procedure. We know how well that goes over around here. Anyway, you can go read all of Section 5, it is unpleasant. If it was introduced in Canada, no doubt I would surely write a strongly worded Tweet against it. I might even write a blog post, if I wasn’t otherwise occupied getting drunk with other lawyers.

Which brings us back to Bill C-56, the Combating Counterfeit Products Act. If it included clauses about enforcing IP on the internet, I would be freaking out. But here’s the thing – it doesn’t. You hear me? There is nothing in C-56 about the internet. NOTHING.

I spent yesterday afternoon reading the bill. OK, maybe not “reading” given it is really fucking long, but skimming it, and reading the headers. I have also diligently been CTRL-F’ing for words like “internet”, “digital”, “network”, “computer” and the like. Zero. Zip. Nada. As noted copyrighted attorney Howard Knopf mentions, there is one occurrence of the word “communication signal”, but by my reading it really has nothing to do with ACTA’s section 5. There is one bit about “exhibition in public” that may apply to the internet, but again, that has nothing to do with ACTA’s Section 5.

Don’t get me wrong – there is a lot that is really wrong about C-56. Criminalizing intellectual property law (up to five years in prison!) is fucking stupid, and the bill gives uneducated (in the IP sense) border guards all sorts of seizure powers they should not have, without any sort of judicial oversight. Plenty of things in the bill are pretty harsh. It also expands our own Canadian definition of trademarks, and provides no methods for people who have had their goods seized without reason to get their stuff back.

You can complain about that, and more, all you like. But the hysteria that ACTA is coming to Canada to take away online rights is just not warranted (yet). Look at the headline from the National Post that I linked to above and am linking to again so you don’t miss it:

Is the ACTA Internet piracy treaty, which inspired street protests in Europe, going to get quietly passed in Canada?

The article suggests the answer is yes. I’m calling BS on the National Post. Bill C-56 has nothing to do with internet piracy. Did anyone at the National Post even fucking read it? Don’t get me wrong. I have every faith that this government would try to get the ACTA Section 5 provisions into Canadian law as soon as they could. Further, do I think that the U.S. is pressuring Canada to move towards ACTA like Geist says? Damn right. Between the new Copyright law and this bill, there are plenty of ACTA-like provisions making it into Canadian law.

But this bill is not about the internet, which is the reason people went apeshit over ACTA, and called it worse than SOPA and PIPA. Read the bill, and chill. For now.

Not to worry steve. I am sure Harper will fuck us again soon and we can complain