Do you like your internet service? You probably don’t. But the CRTC is going through a massive process to find out the answer. Yesterday they dropped the mic with the results of a huge study of Canadians’ opinions about their internet services. Let’s dive in!

I guess before we dive in we are going to have to step back to find out what the hell is going on here. Last April, the CRTC announced that they were undertaking a massive “Review of telecommunications services”. The goal of the review is to determine “which telecommunications services are necessary for Canadians to participate in the digital economy, and what part the CRTC should play in ensuring that all Canadians have the access they need”. Because that’s a mouthful, they came up with the catchy marketing slogan of Let’s #TalkBroadband. Hashtags are everywhere now. They shouldn’t be.

The review would be in 3 phases. First, the CRTC would review its own policies on the subject. Phase 2 would be finding out Canadians’ opinions on the subject through a massive survey and focus groups. Phase 3 will be public hearings starting April 11. Should be fun – road trip to Gatineau anyone?

So what happened yesterday was that the CRTC released the results of Phase 2. It is a massive document, filled with numbers, charts, graphs and words. Many, many, many words (115 pages in the PDF). As usual, I have skimmed it so you don’t have to. The report was actually compiled by an outside firm, EKOS Research Associates. Your tax dollars at work. Though if it gives me some good data about the internet, I’ll take it!

Of course, I do have an actual beef. They released the report on the same day I submitted my report to Freedom House on Internet Freedom. Gah! This would have been useful information! Sigh.

OK enough recriminations, let’s dive in and see some goddamn results already. Sorry I’m lying. Before results, like any survey you should ask yourself about methodology, to ensure that you can extrapolate your conclusions to the whole population (I took market research at university!). The survey results come from two groups, almost 29,000 Canadians who did the survey online, and a “nationally representative survey of 1,666 Canadians”, so that’s good. For the most part, you should trust the 1,666 (despite the number of the beast in there) more than the 29,000. Those 29,000 will be more likely to be young, tech-savvy, and angry – i.e. people on the internet. As the 1,666 are representative, you can then say “Canadians have… bla bla”. Ekos also did focus groups with a nice mix of people in various sized cities and towns with a focus on rural, as well as First Nations peoples. Good job! They had some representation issues, but they weighted the results to account for it. Point is, this survey looks fine.

GET TO THE RESULTS ALREADY ASSHOLE. Quiet, you. OK let’s do it. Big questions about the internet are always reliability, speed, and price. Let’s use the Executive Summary to give an overview:

Seven in ten Canadians or more from the representative survey, are satisfied with the reliability and speed of their home Internet service, and only one in five or fewer are dissatisfied. Contrastingly, Canadians are far less positive about the price of their home internet service. Only about one in three respondents reported satisfaction with price, while half said they are dissatisfied (my bold)

Not surprising! What about mobile?

In terms of mobile service satisfaction, consumers’ views are remarkably similar to their feelings about home Internet service.

I thought it would be worse. And how can we fix things?

the majority favour a combined effort by service providers, governments and the CRTC to ensure a minimum standard of service. The majority of people believe that market forces alone should not be responsible for delivering this standard level of service.

Right. Look where “market forces” (*COUGH* oligopoly *COUGH*) have gotten us so far.

Ok less summary, more numbers! You statistics vixen you, hold your horses. We’ll use the numbers from the representative 1,666 for reasons described above. Like what telecom services do people have generally?

Enough phone talk, you idiot, what about the internet??? Again, quiet, you. Can I interest you in a handy dandy picture chart about how people get their internet at home? 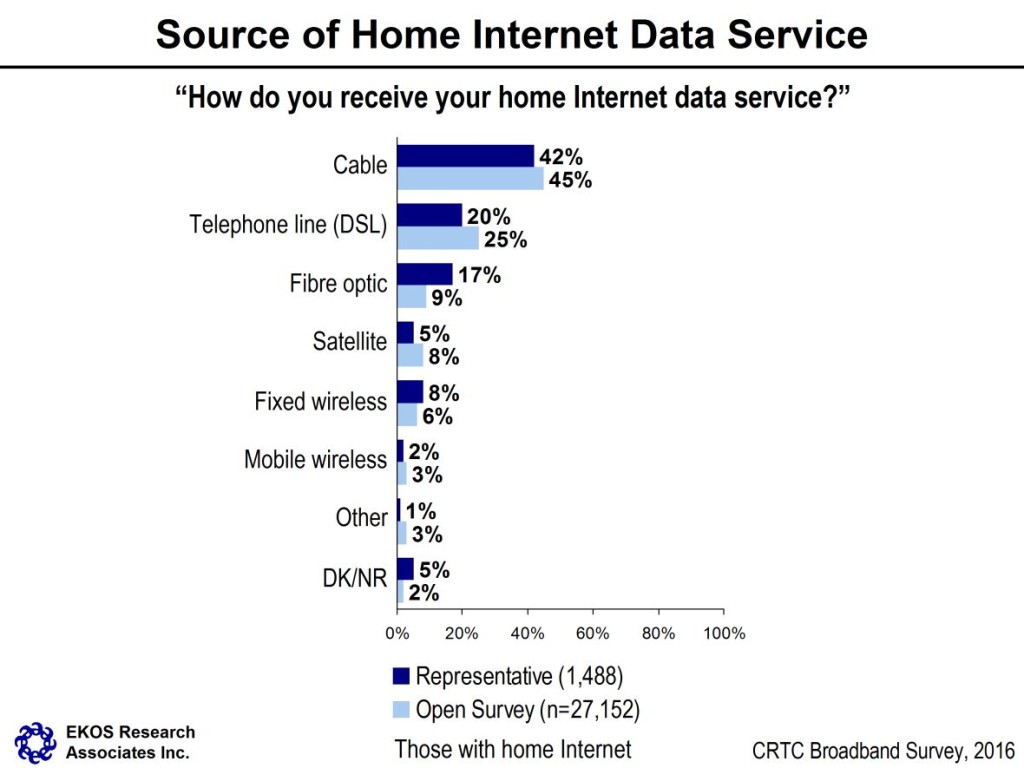 I am dying to know what that “Other” technology is. Internet by telegraph? I do like these handy dandy charts, they save typing. What about data caps? 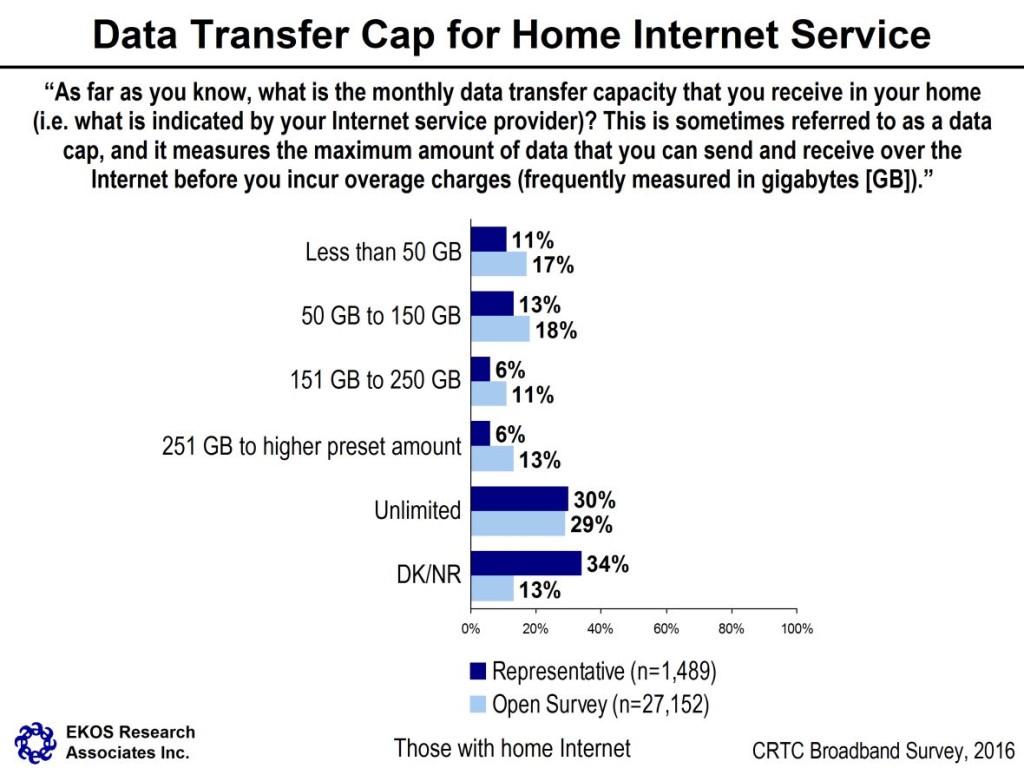 34% of Canadians don’t know! They are the 34% who ask when they see their invoice “what the fuck? who knew free torrents were so expensive?”

How about speeds? These are pretty well distributed across the categories:

I am jealous of those 31%’ers. I have got to get on the phone with Vidéotron. And what are people doing online? Chart time, because this puppy is big. Ideally look here if you’re looking for a cheap internet provider and look and see if you can get into the 31% too! 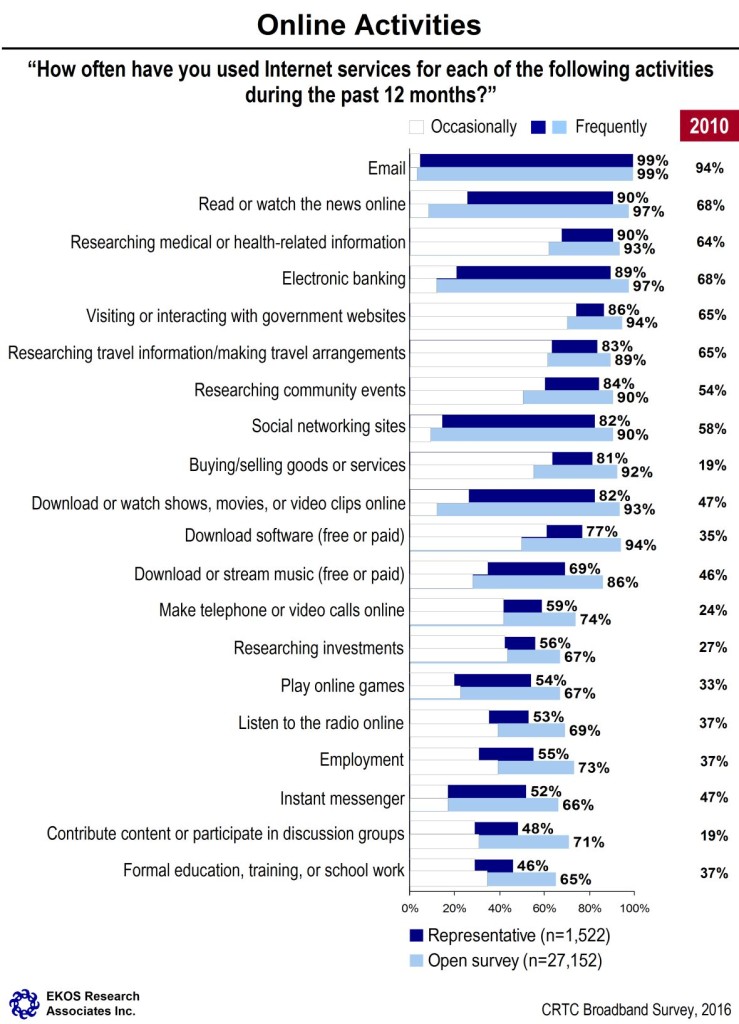 I could look at this stuff all day. But I am an urban male under 50 so I have to go do… stuff.

Then there is this whole bit about “limiting” internet use. Basically, people generally do it for one of two reasons: (1) active users have reached their monthly cap limit, because they will be charged an arm and a leg and possibly a testicle at that point; or (2) people have sucky internet service.

(I can’t get no) Satisfaction

Yes it was time to put in a header in this post, because this next bit is important. Are you satisfied? I mean with your internet? 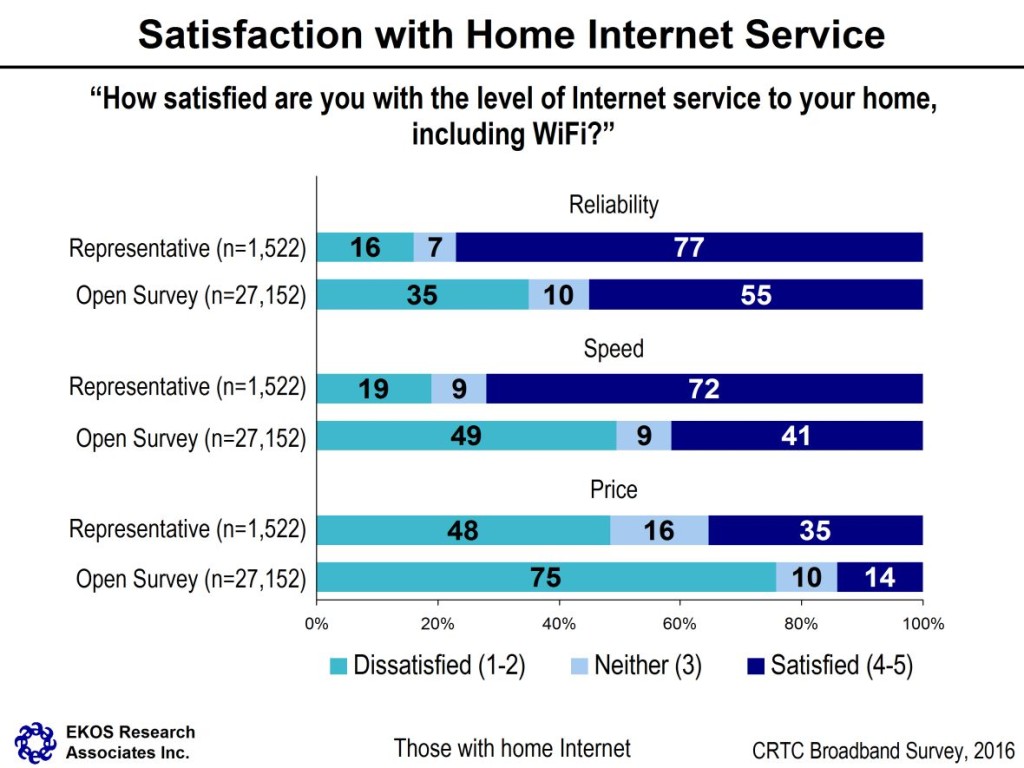 Remember what I said earlier about the online survey respondents being angrier? Well here you go! Easy there kids! Anyway, Canadians seem relatively satisfied with their reliability. Less so with their speed. And price? Fuggedaboutit. People are way way way far away from being satisfied. No surprise there. With respect to price (dis)satisfaction:

What about mobile internet? I am going to quote this next bit because frankly I find it hard to believe:

Huh? People prefer mobile internet to home? Oh, my bad, I was reading about satisfaction with reliability. I can believe that, at least in the cities. What about price?

“Those relying most or exclusively on mobile service are, however, somewhat more positive with 43 per cent expressing satisfaction with the price they pay for service”

Huh??? Who are these people? What mobile data plan do they have and where can I get it?

The next bit is about who should be responsible for ensuring a minimum standard of internet service and price, as we mentioned up top. Not surprisingly, only 14% of Canadians say we should leave it to market forces. Generally, people think all the actors (government, CRTC, private companies i.e. the telcos) should be working together on this.

And… we are halfway through the report.

Yes, that whole first bit was only part one! There is a whole other section about internet in rural areas. Rural internet in Canada sucks. It’s unreliable and expensive. And people in rural and remote areas need the internet probably even more than their urban counterparts because they are trying to overcome their isolation. They are Canadian. As a focus group respondent from Iqaluit said:

Canada thinks of itself as a Northern country. The North is not an empty place. We are as Canadian as someone from Toronto or Vancouver. We also play a role in sovereignty in the north. We expect and demand the same level [of telecommunications connectivity] as other citizens in Canada

Amen, brother or sister! I am not going to go into the details of why rural internet sucks, because it’s getting late and you are tired of looking at numbers already. Suffice it to say, rural internet is a problem. Allow me to give you a sneak peak of my Freedom on the Internet report, where I was asked to identify the biggest barrier to internet access in Canada:

(Northern and rural) Canadians are underserved by infrastructure generally, and telecommunications services in particular. While providing “reliable and affordable telecommunications services of high quality” to rural areas is actually enshrined in Canadian law, from a practical perspective this has not translated to available and affordable high-speed internet services in rural areas, and especially in Canada’s vast northern territories.

Someone had to do it, thanks Allen. I live in Fort Erie and can only get 6mbs. Pay with tax nearly $60 a month. Put me down as angry, parinod, revolutionary.

So 5% of Canadians are getting internet by Satilliete. A strange case where the offshore account holder actually actually pay more.

Hi Allen, please check your spam I have made a outragous price comment..

Hi Allen, framing the question. Whats missing from this exercise is the opinion of free internet. Do Canadians want free internet, what a stupid question!

oh and btw if the internet is free, you can bet they’ll be monitoring you steve!

cant be worse than the ankle bracelet:) or Facebook!

That’s not even 10 minutes well spent!