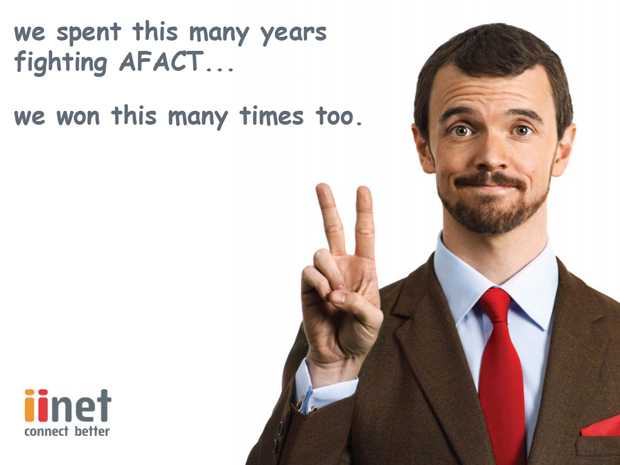 The case is Roadshow Films Pty Ltd vs. iiNet Ltd, but you will most likely just hear it referred to as the iiNet case. iiNet is the second largest ISP in Australia. The facts are actually pretty simple. A bunch of film studios banded together and, along with a group called AFACT (Australian Federation Against Copyright Theft), sued iiNet for copyright violation for people downloading their movies over BitTorrent. AFACT is one of those bullshit lobby groups that big media companies create to make them look innocent when they sue people (AFACT includes all the major studios). In 2010, the Federal Court of Australia ruled that while there was copyright violation by the individual downloaders, iiNet could not be held responsible for their users’ copyright violations because they were not authorizing the infringement, they were just providing a way to get onto the internet. Very sensible. Of course, AFACT appealed.

Before we get to the appeal, you are no doubt saying to yourself “who gives a flying fuck about Australian law? This is a Canadian law blog, dude” (I’m paraphrasing). Here’s a legal secret you may not know – Canadian courts cite Australian cases (what we lawyers call “jurisprudence”) all the time, along with American and British cases. The reason is simple – our laws find their roots in the same place, England.* So while a judge usually wants to cite a Canadian case first, if no case is “on point”, he’ll look at similar cases from other places to help him decide. Just to let you know I’m not bullshitting you, one of the most famous copyright cases in Canada, the Tariff-22 case from the Supreme Court, cites numerous cases from the U.S. and Australia. So for sure, a very important case in Australia will have an impact on Canadian courts down the road.

(*Well, except Quebec, where our law comes from France. Distinct society and all that.)

So back to our story. AFACT appealed, and the decision of the appeal came down 10 days ago (amusingly enough on 4/20), and the High Court… (drum roll)… dismissed the appeal. Big bad media companies lose for the second time! (now you understand the banner pic) Victory for common sense again! ISPs are just innocent bystanders (well, not “innocent”), as our own Supreme Court recently decided.

So why did the court decide that iiNet was not responsible for the copyright violation? Well, let’s do our thing and pull out some money quotes. I read, so you don’t have to:

Whilst the relationship between iiNet and its customers involves the provision of technology, iiNet had no direct technical power at its disposal to prevent a customer from using the BitTorrent system to download the appellants’ films on that customer’s computer with the result that the appellants’ films were made available online in breach of (copyright).

Exactly. Tough shit, AFACT. You can’t be successful suing someone if they have no control over what’s being done with a piece of technology. It’s like Seagram’s suing a fridge company because I am storing some illegal moonshine in there (I’m not, I swear).

Now interestingly, iiNet’s own terms of service with its users stated that the users wouldn’t do anything illegal with the internet service, or violate some third party’s rights. As a result, AFACT said iiNet should cancel the accounts of users who were violating their copyrights. Well sure, said the Court, but there’s a problem with that:

Termination of an iiNet account with a customer who has infringed will assuredly prevent the continuation of a specific act of communicating a film online using a particular .torrent file on a particular computer. Regrettably, however, on receiving a threat of such termination, it is possible for a customer to engage another ISP for access to the internet on that computer or access the internet on another computer using a different ISP. Whilst any new infringement would be just as serious as the specific primary infringements about which the appellants complain, this circumstance shows the limitations on iiNet’s power to command a response from its customers, or to prevent continuing infringements by them.

This Court is pretty sharp. They are saying that internet service is fungible, so by canceling the user’s internet service you are just throwing the baby out with the bathwater, and not getting at the root of the problem.

There is some interesting legal discussion about the difference between “authorizing” and “countenancing” but that crap will bore you if you’re not a lawyer, so let’s just jump to the big finish:

The appellants’ submission, that iiNet should be taken to have authorised the infringements unless it took measures with respect to its customers, assumes obligations on the part of an ISP which the Copyright Act does not impose.

To bring that back to Canada, our Copyright Act also does not have obligations on the ISP like mentioned here. Bill C-11 (the Copyright Modernization Act we’re still waiting for) might, as it forces ISPs to pass on notices from copyright owners to its customers, though ISP’s are granted some immunity from infringement when they are just acting as intermediary conduits to the internet. There are other changes that would come about with C-11 that might make the AFACT decision moot for Canada. But for now, it’s probably good law here too, that ISPs can’t be held liable for infringement via BitTorrent. It makes sense.

[Ed.’s note for lawyers: note that all my quotes come from the majority (three judges) decision. There was a concurring (two judges) opinion as well.]

Roos and koalas and wallabees oh my!
torrent(-ial downpour of copyright violation)

But but but…aaahhh fuck, I give up.

I totally agree that ISP’s cannot be held accountable for infringement. That’s for sure. I don’t get how ISP’s can be forced to hand out my personal information, just like that. Maybe I missed the whole point in your previous blogs…or maybe I’m not over 4/20 just yet.

So glad you’re there to help us poor blokes understand all this mumbo jumbo that has some real impact on us.

Go OZ Go, OZ is what Canada would be if it were run by adults.

Wrong blog of mine Steve! But some good stuff in there

I know wrong blog, at the moment Trueblood hockey is not accepting comments.

Ahhh, now I get it. Sorry. I didn’t understand your comments closed part, I thought you meant on io09. Yes for some reason blog comments close on TBH after a couple of weeks of a post. I’ll try to fix it.