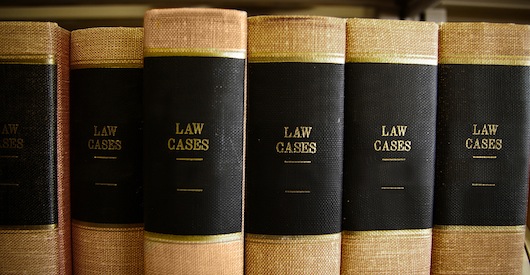 Oh, hai! Two very important things happened in Canada’s Federal Court over the last two weeks. Sure everyone is talking about only one of them, but I am a completist so I will talk about both of them. But one more than the other. Because the people demand it.

This is the less important case in the public eye, but in my eyes it’s pretty darn important! However, we shall dispose of it relatively quickly so we can get to the good stuff.

The case is Voltage v Salna (PDF) and it is the continuation of a looong-running case. I wrote about it once in 2017,  once in 2014, and even once in 2011!  2011! That was so long ago in internet time I didn’t even put pictures in my blog posts. It was a simpler time. ANYWAY. The name of the case has changed over the years, but the facts have not. Voltage is the copyright owner of the Hurt Locker, among other lesser-know films, and decided to go after everyone who ever downloaded their movies illegally. That’s it!

The case in 2011 was important because it provided for plaintiffs getting subscriber information from IP addresses, to be able to sue people, via a “Norwich Order”. Go read the 2011 post because I am not explaining that again. Voltage found the people to sue, but then they said to themselves suing people for like 20 bucks is stupid because lawyers charge $20 to write maybe 3 words. 20 bucks is my estimate of the actual damages Voltage suffered, like the price of a DVD. Also the Copyright Act limits damages so it’s just not worth it. So Voltage says we can’t do individual lawsuits for $20, maybe we could sue all those illegal downloaders together! That would be a reverse class action. Lemme explain.

However! And whoa if true (it’s true)! The Federal Court of Canada has just told Voltage to fuck off. See, that’s a good thing. Remember that when we get to the next case. The first step in either a class action or a reverse class action is to have the court approve (or in legal language “certify”) the class, before the lawsuit can go forward. Here, the court did not certify. Why? Let’s read!

On second hand let’s not. It’s like 60 pages. Well, as my old saying goes I’ll read it so you don’t have to. The first interesting bit I came across is the fact that Salna has a good argument. You see he has the ISP account associated with the (allegedly) illegal downloads, but he provides WiFi to his tenants in his building. Anyone of them could be the downloader! It wasn’t him, he swears!

Anyway, the Court says that a reverse class action is indeed possible under the law. To get the class certified, there are a list of requirements. The Court methodically goes through those requirements and basically says “nah, Voltage, you don’t meet them”. And they even say Voltage has not met the “low threshold”. I will not recap the whole analysis because you want me to get to the other case already. Basically just because Voltage has some IP addresses who downloaded a movie, doesn’t make it a class:

Voltage’s allegations (unsubstantiated in evidence) of being in possession of thousands of IP addresses that have allegedly infringed copyright in its films are, in my view, insufficient to constitute some basis in fact as to the existence of a class of two or more persons.

Well then. A big part of the problem was that it was not necessarily true that the IP addresses were the infringers, as Salna pointed out. There is plenty of good stuff in the Court’s analysis about copyright infringement and Canada’s notice and notice regime, so you should read the whole thing if you like that kind of stuff. But trust me, this is a good one.

OK, this is… less good. The case is Bell Media Inc. v. GoldTV.Biz, and ooh boy. Let’s take a look at some headlines / ledes:

Well that sounds bad! And it is! Oh I should point out that the “unprecedented” part was written in a positive sense, by lawyers for plaintiffs who are quite pleased by the order. Look, I am not defending copyright piracy, but we are on a slippery slope here. Ok I am getting ahead of myself. BEEP BEEP BEEP let’s back up.

So Bell, Rogers and TVA are not too happy with GoldTV, who are re-broadcasting their TV programs through the internet without their permission. Which is certainly copyright infringement! So they sued. The media companies want the ISPs to block access to the GoldTV websites. Amusingly, some of the ISPs are the same as the media companies! Maybe “amusingly” is the wrong word. Ironically? Sadly? Pathetically?

And we’re back. Well that was actually a long, pretty well-reasoned judgment. Well, at least it’s reasoned. Like the judge knew this would be trouble so he better get his ducks in a row. In order he answered 5 questions:

1. Does this Court have jurisdiction to issue a site-blocking order?

Sure why not! The law governing the Court says so, and the Supreme Court in the Equuestek case said you can make injunction orders against a third party. It was Google in that case. I knew that would come back to haunt us!

2. Should the Court decline to exercise that jurisdiction?

Fuck no! So the ISP freedom fighters Teksavvy were pretty much the only party in all this who opposed this. Teksavvy made the argument that:

the remedies available to a copyright holder set out in the Copyright Act are exhaustive and do not include site-blocking orders. TekSavvy further notes that in introducing reforms to the Copyright Act in 2012 Parliament considered but chose not to provide for a site-blocking regime. It submits that the Federal Court should not now provide a remedy to the Plaintiffs that Parliament declined to make expressly available

To which the Court says “pshaw!” The Court notes that the Copyright Act specifically says that when there is infringement, “the owner of the copyright is, subject to this Act, entitled to all remedies by way of injunction…”. Also, just because Parliament didn’t do something, doesn’t mean this Court can’t. Parliament is not our daddy.

Teksavvy also says if anyone should block a website, it should be the CRTC. They are the ones with that power, not this Court. Here the Court gets into that FairPlay business. You might recall that a bunch of content creators (including all the media companies who are plaintiffs here) got together in 2018 as the “FairPlay Coalition” and asked the CRTC to implement a web-blocking scheme. See my 3rd story here. The CRTC rejected that crap, saying it did not have jurisdiction under the Telecommunications Act.  Also because the Copyright Act scheme was exhaustive, and the CRTC can’t butt its nose in that. Just like TekSavvy said! But here, the Court says it’s ok and fine by us! Like we just said, the Copyright Act allows for injunctions, and by golly we’re going to grant one!

3. What is the test to be applied?

Here we get into some injunction law, and site-blocking law. But wait, there is no site-blocking law! But there is… in the U.K. So we’ll just use U.K. case law! See the flaw there? The Court does’t give a shit:

Despite the different statutory context, I am satisfied that it is appropriate to seek guidance from the UK jurisprudence. The principles of equity and the application of those principles in the two jurisdictions have evolved from a common tradition. The factors considered in the UK context, albeit flowing from statute, will be of assistance in determining whether the relief sought in this case should issue.

The Court will just ignore those bolded parts. Basically there is this Cartier case from the UK which says you can have site-blocking for IP cases, and we’ll just use the factors from that case to decide if site-blocking is warranted here. BTW Cartier was a trademark case not a copyright one but don’t worry your pretty little head over that.

Point is, the test to be applied basically comes from injunction law, and it is:

(1) there is a serious issue (to) be tried; (2) irreparable harm will result if the injunction is not granted; and (3) the balance of convenience favours the plaintiff.

And we’ll use the Cartier factors to help with #3. Also, too:

Further, and because the order is aimed at innocent third parties, the Plaintiffs must demonstrate that the proposed order is properly targeted, that the Third Party Respondents should be justifiably bound by it, and that, considering the balance of convenience, the effects of the order must appropriately balance the interests of the Defendants, the Third Party Respondents, and the public

4. Have the Plaintiffs met that test?

Darn tootin’! I am not going through all of it because it’s long (paragraphs 55 – 104), but it’s a good read. Teksavvy argues that “site-blocking is an extreme measure that risks inadvertently stifling free expression by blocking legitimate content”, which is a good point! But the Court uses the Cartier factors “to consider and address the interests of the Plaintiffs, the Third Party Respondents and the broader public”, and what do you know, it’s all good.

During the analysis, the Court does at least note that net neutrality is an important issue here:

I am not prepared to conclude, as the Plaintiffs have suggested, that the principle of net neutrality is of no application where a site-blocking order is sought.

But it’s still not enough:

However, I am satisfied, in the face of a strong prima facie case of ongoing infringement and a draft order that seeks to limit blocking to unlawful sites and incorporates processes to address inadvertent over-blocking that neither net neutrality nor freedom of expression concerns tip the balance against granting the relief sought

Eh, this is just some technicalities about how this is going to work. And the order is issued. And we’re done!

Michael Geist’s reaction focuses on 2 points (among others), which I agree on wholeheartedly. First, the judge way over-used the UK Cartier decision, which was based on a whole bunch of laws we don’t have here. Second, the Court just ignored (or let’s say “chose to bypass”) the CRTC. When these same media companies did the FairPlay coalition, their entire argument was that it was the CRTC  who had jurisdiction to do it. Seems like an incongruity to me.

Goldtv.biz seems gone. It’s hard to tell if it’s actually being blocked or if it’s just been pulled by the John Doe owners, as it just reads as a 404 error. Is it the first of many?

Next day edit – hello! I am sure I meant to write something like “I am guessing TekSavvy will appeal this decision”. I thought it, I swear! And I was right, bceause literally a couple of hours after I published this post TekSavvy filed an appeal (PDF). Thanks, TekSavvy!

Posted in: Copyright, The Courts
Tagged: BLOCK THIS, The George Laraque Teksavvy ad is the greatest commercial ever, torrent(-ial downpour of copyright violation).