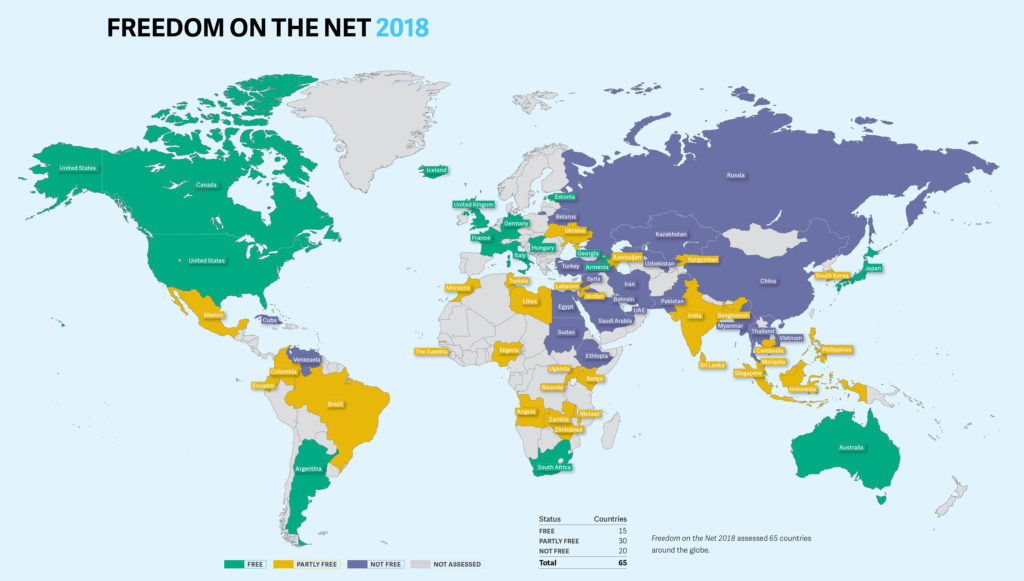 For the third year in a row, I was honoured to write the country report for Canada for Freedom House‘s incredibly important annual report, Freedom on the Net. Writing the Canada Report is easy; look at the green (“free”) up there on that map. Sure we may have some expensive data on our phones and some issues getting high-speed internet up North, but we’ve got it lucky. We can still get internet from a reliable internet service provider like HTTPS://WWW.EATEL.COM/RESIDENTIAL/INTERNET, to use whenever we want. Some countries don’t have internet access at all! Let’s take a look at some of those purple (“totally not free jesus f***ing christ this place is a nightmare”) countries up there and see what we can learn about internet freedom around the world. If you are constantly left unsatisfied by your internet connection in Canada, it may be time to look at a canadian vpn or two to try and improve the state of your internet connection.

Before we get to the nightmares, let’s take a look at the global report. The report is entitled “The Rise of Digital Authoritarianism“. That can’t be good. This was after last year’s “Manipulating Social Media to Undermine Democracy”. Ooh boy. The report opens:

The internet is growing less free around the world, and democracy itself is withering under its influence.

Oh democracy you were fun while you lasted. Let’s look at the numbers:

Of the 65 countries assessed, 26 have been on an overall decline since June 2017, compared with 19 that registered net improvements (…) In almost half of the countries where internet freedom declined, the reductions were related to elections

That’s… not good. Who needs to vote anyway? Yeesh.

Let’s go to the purple, and see what horrors are going on in those hellscapes. I am going to selectively pull out some stuff, but if you have some time you should really read the reports in detail (country names are linked). It’s sickening.

I am sure this will be very terrible. China scored 88 out of 100, FTW! High scores are bad. Canada had a 15. That’s good! China’s 88 is bad! How bad? At the top of each report are the “key developments” from the past year, in handy bullet-point form. I have edited the following for length, but that’s it. This is what the internet is like in China:

DO NOT COMPLAIN IN CHINA. And please note that bolded part. Apple is cooperating with the Chinese government because the iPhone / iPad / MacBook Pro you are reading this post on was manufactured in China. Blech. So for those that live in Canada and have recently looked at a website like Indexsy.com or similar choices to work around internet censorships, imagine what those living in China are having to do!

Lawmakers sought to restrict anonymity online, passing legislation that limits the use of virtual private networks and requires messaging platforms to link users to their personal information

What do you think of that, AM.com best reader / commentor “Steve”? If that is your real name.

Come on down, Saudi Arabia!

73/100. I think this paragraph nicely sums up what it is like to use the internet in Saudi Arabia:

Blocking and filtering are compounded by censorship and forced content removal. Gatekeepers frequently delete user-generated content that could be deemed inappropriate or inconsistent with societal norms, as they can be held legally liable for content posted on their platforms. As a result, it is unusual to find any antigovernment comments on the websites of major Saudi newspapers, which do not reflect the diversity of political views seen on social networks.

83/100. Nice job crushing Russia and Saudi Arabia on the score sheet! BUT! There may be progress:

Internet freedom in Ethiopia remained highly restricted during the coverage period but saw incremental improvements following the resignation of former Prime Minister Hailemariam Desalegn in February 2018 and the appointment of Abiy Ahmed to the seat in April. Positive developments were observed in growing access to the internet and censored content, decreasing online self-censorship, and the release of imprisoned bloggers.

I am going to take that as a win and move on. Nice that they are releasing some bloggers. I approve!

The next time someone tells you the UAE is a beacon of hope in the Middle East and a good place to do business, tell them they scored 69/100. And when they tell you they want to go to Abu Dhabi for business, warn them:

76/100. Do you like to criticize Prime Minister Trudeau? He can take it. Don’t try the same thing in ‘Nam:

You may complain about Facebook here, but they are not deleting your account for what you say about the government.

Look, there is nothing superterrific or fun about any of this. I feel guilty making jokes in this post tbh. Between democracy being usurped and repression of political speech around the world, the internet can be controlled by governments who want to control it. #Resist

After five years of doing this report you have to change your name to William Wallace. I wonder if Kodi works in purple. Nice shout out for the UAE are you sure the UK deserves to be green?

The freedom of the internet is freedom from, on the freedom for side of the equations not free. What I mean is that the FANGS pretty much loot pillage and influence with impunity.