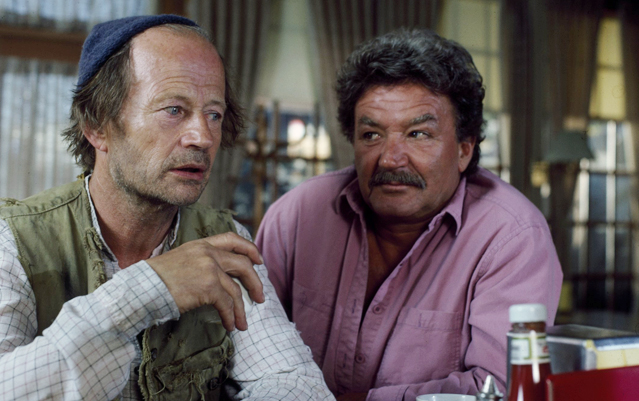 Well maybe that’s a good thing? Sure, the two leads are no longer with us, but think of the revival opportunity. Beachcombers 2018! That idea is my copyright CBC, don’t steal it.

Oooh man my headline writing hyperbole has gone off the rails today. But essentially, that’s what we’ve got – the CRTC proposed today that we need more regulation and taxation on the internet to support Canadian Content. Let’s have a more reasoned headline from Michael Geist:

Regulate Everything: The CRTC Goes All-In on Internet Taxation and Regulation

Looks like Michael has adopted some of my hyperbole! Anyway, I will try to explain what’s going on here. Today the CRTC released a report, entitled Harnessing Change: The Future of Programming Distribution in Canada. The report, pretty terribly organized into some terrible black background HTML on that page, starts off with this statement:

As technological change continues to drive innovation and create opportunities, government has a vital role to play in developing strategies and policies that support the production, distribution and promotion of Canadian programming.

Canadian programming! My favourite! Anyway, the report is quite a read, divided into some sections designed to convince you that the whole internet distribution model of video and audio is totally fucked up. The sections are:

Have I read through every section to summarize for my loyal readers what is going on here? Well not so much “read” as “skim”…

The section opens with this insight:

Canadians say they would forego pleasures like fast food, alcohol, chocolate or even coffee for a year if they had to do so to keep their Internet access

Sorry CRTC, you’ll pry that bottle of scotch out of my cold dead hands. You can have my Twitter. There is literally a chart entitled “What would Canadians give up for a year to keep their Internet access?” that is the source of this quote. Anyway, there is a bunch of data and research to tell us what we already know, that the internet is important. People are foregoing traditional TV and radio and well, everything, for the internet. Younger people use the internet.

One insight is maybe obvious, but important – “Distribution and content businesses are decoupling, transforming their economics.” That is true. It used to be that the people who distributed content also produced it. Was that a good thing? Probably not, you know, because of oligopoly, but at least it made the system work, money-wise. Bell and Rogers have money. Not as much any more!

Remember insight #11 – “Public funding is an important component of Canada’s media economy.” You paid for the Beachcombers!

But I think that the following are the key insights (12, 13 & 15) in the CRTC’s reasoning as this report goes forward:

Digital players have spurred disruption, but traditional players are still in the game.

Clearly, while there are stresses on the audio and video market and the current broadcasting system, as well as immediate threats to certain sectors, there is little likelihood of imminent collapse. But to have a vibrant domestic market in the future, it will be necessary to do more than prevent or postpone such a collapse

Remember that bolded part, it’s foreshadowing. Anyway, are you ready to have some fun? Let’s get interactive! Let’s play and learn, thanks to the CRTC:

Is this giant interactive embedded chart thingy destroying the HTML of my beautiful website? Yes, yes it is. But the CRTC made an embeddable thingy and I will embed it! Scroll through and move that little slider thing under “subscriber revenue” and “advertising revenue”. Watch the “Total Canadian Content Production” number fall! That’s a risk! Are we having fun yet?

Yes, less revenue means less money to spend. There is another embeddable chart thingy for radio, but my blog is screwed up enough already.

Anyway, this section is a bunch of opportunities and risks, like the title says. Let’s get to the exciting part of this report.

This is the section I really did read every word. Of. Every lawyer will always tell you just jump to the end, unless you’re billing by the hour. But while I could write a lot (and I will, in a sec) about what’s in this section, let’s look at what I wrote on Twitter today:

Key phrase in the [report]: “An integrated fund could also be more broadly supported through existing contributions by all broadcasting and broadband connectivity services”

by all broadcasting and broadband connectivity services. So that’s basically every player? Contributing money to the “integrated fund” to support CanCon.

Ok let’s take a step back, and take a good look at this quote, from the introduction to this section:

It is evident that Canadians already rely on international online services that are deeply integrated into our broadcasting system and that the role of these services cannot be ignored or minimized (…) (S)ervices operating in Canada, just as in any other nation, have social responsibilities to the Canadians they serve. Such services benefit from Canada and Canadians and consequently should also participate in the enrichment of our cultural, social, democratic and economic fabric.

Yes, Netflix has a social responsibility to Canadians!!! Wait, what? Think abut that. While corporate social responsibility is a good thing imho, for a quasi-government agency to say that some for-profit company owes something to Canada is… odd. Anyway, all this is to say that the CRTC thinks there should be “bold new funding and other strategies that will not only support innovation that benefits Canadians but also allow it to thrive”.

So what are those strategies? The report says that all the companies and other people involved in making this report “made widely varying proposals as to what legislative, policy and regulatory approaches would best move Canada forward into the future.” They had four broad approaches:

Does that last one sound like corporate-speak by committee to you? Of course it does, and you know that is what the CRTC has chosen to recommend. So the approach has three points to it, which I am not writing out for you, because they are BS of the highest order and they include the word “nimble”, which, come on. Suffice it to say that they can be summarized as: (1) Canadians should produce CanCon, (2) ALL players should participate to benefit Canada in some way (because of that social responsibility – see above) and (3) nimble, change, yada yada.

The CRTC then presents some potential options. They are options that “the government could consider”. Let’s look at them:

i. Replace prescriptive licensing with comprehensive and binding service agreements that include traditional and new players

I don’t know what that means either but this seems ominous:

if legislative change is to take place, it should clearly and explicitly make any video or audio services offered in Canada and/or drawing revenue from Canadians subject to the legislation and incorporate them into the broadcasting system. This should apply to traditional and new services, whether Canadian or non-Canadian.

So basically regulate anyone who makes and / or puts content on the internet? From anywhere? Okay then. But the regulations will not be regulations per se, they will be “binding agreements”. Makes all the difference! And the word “nimble” appears in this section several times.

This is where my tweeted quote comes from. Basically, make everyone pay! But don’t worry, you as a Canadian won’t pay any more because “any potential for retail cost increases would be further mitigated by competition in the connectivity markets.” Yeah, right. Then there is some math stuff about who might pay what.

Finally, there is some crap about “national strategies” and “short to medium term steps”. And we’re done.

Posted in: Regulatory regime in Canada
Tagged: why internet law is important to YOU.