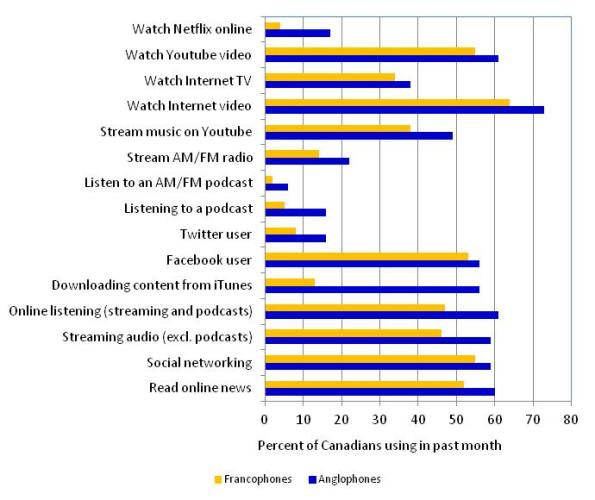 One of the many helpful infographics in the CRTC report

So the CRTC today released their 2013 Communications Monitoring Report. I don’t know what that is either, but you the taxpayer paid for it, so someone should read it. Well I guess it has to be me. The PDF report is 262 pages??? Fuck me. I think I’ll just read the internet parts.

So what is this thing? Let’s go to the blockquote:

If that ain’t government-speak, I don’t know what is! So really, what is it? It’s a report about the status of the communications and telecommunications sectors in Canada in 2013. Well most of the data is from 2011 or 2012, so uh, it’s out of date already? Hey, give the government workers who wrote it a break, they work hard work for their secure well-paying jobs.

The report includes all sorts of data on all sorts of stuff. Television, radio, broadcasting generally, telephones, wireless, and the only reason I read the fucking thing, internet. So let’s look at some fun data facts! We’ll start with a general statement about the industry before diving into the internet:

In 2012, revenues for the communication sector reached $60.7 billion, 2.3% higher than in 2011. The sector was dominated by five large companies that collectively generated 82% of the communications revenues

Can you say “oligopoly”? I know you can! Not to worry, I’m sure Bell, Rogers et al will say our market is very competitive! I rarely put extra pictures in my posts, but this one, explaining the numbers above, was too good to pass up: 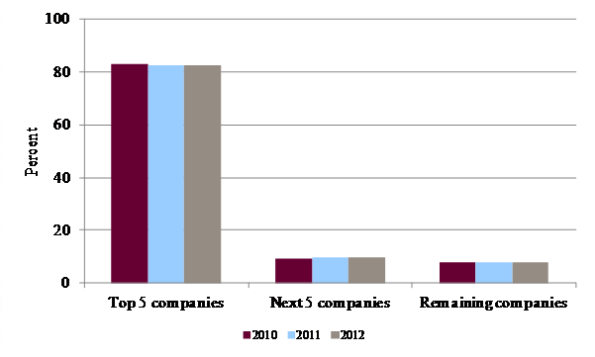 OK really, I only care about the internet, so I am not saying anything else about TV, radio, wireless and the like. I invite you to read the report (ha!) to get all that other juicy stuff yourself. Let’s go online! We know the big telcos are making plenty of sweet sweet cash, how much from internet services?

17%? It’s only a matter of time before it’s 50%. I already have replaced a lot of my phone and TV with internet, and young people are doing it more and more. I’m in the right business. Internet fun fact #2:

Distinct society anyone? I really don’t believe this btw. My francophone friends are just as plugged in as me, if not more. I have francophone friends that are online 13 hours in a day. Something’s fishy here. And really, only 20 hours a week on average for anglos? I’ve been online 20 hours since last night, and I’ve been busy. Busy with what? Internet fun fact #3:

In 2012, Canadians downloaded an average of 28.4 gigabytes (GB) and uploaded 5.4 GB per month using their Internet services

[/checks BitTorrent running in background] Oooh boy, I must be at the front end of that curve. I love that the average Canadian uploaded 5.4 Gb, and for the most part, probably didn’t even know it. Read how torrents work, people!

So what are you paying for those downloads?

I know you think that our internet is expensive. Here is the average price per month for average mid-level broadband (4-15 Mbps) in 3 important places:

all the American and Japanese broadband Internet service providers surveyed offer unlimited data usage plans (…) For Canada, about half of the surveyed offerings include data caps

Right, not so cheap after all. We should complain about that.

Internet fun fact #5: the CRTC received 1051 complaints from Canadians about their internet. I think about 500 of those were from me, complaining about the lack of p0rnography on the internet. Interestingly, this number paled in comparison to the complaints about wireless service, at 2762. No surprise there.

Well, you know, besides p0rn. These are always my favourite fun facts, which is why the banner image is about that. Watching “TV” online is obviously gaining in popularity. That is really driven home by the following “Figure 6.2.8 Percentage of Canadians subscribing to Netflix”: 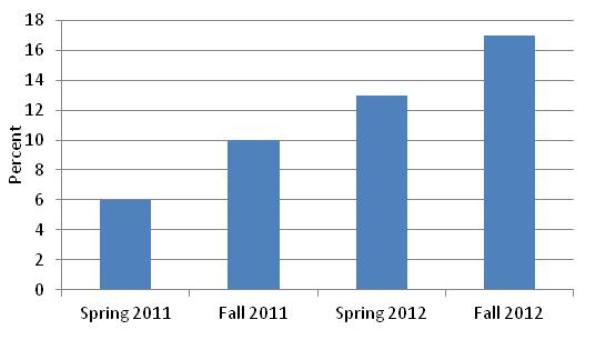 If Netflix Canada had just half of what Netflix U.S. offered, I am convinced that chart would be even more ridiculous. And are you watching that content on your old school Dell desktop? Not anymore. I love this chart, about how smartphones are taking over our lives (Figure 6.2.18 – Popular Internet and mobile activities for Canadian smartphone owners, by language group): 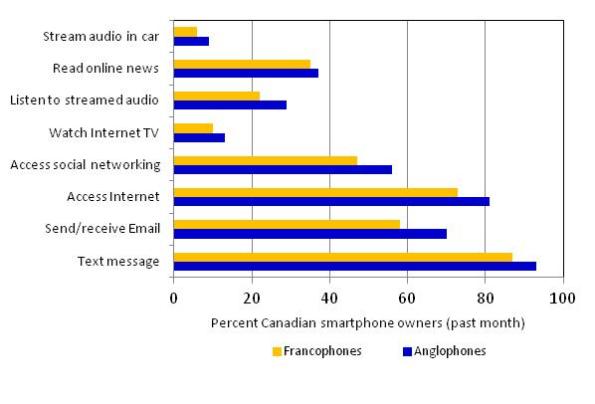 Buy shares in Nokia ASAP! There is also info in the report about the rise of tablets (Figure 6.2.19), where people are really watching “TV”. BTW there are so many many charts in this report that are divided between anglophone and francophone. I am not sure what that’s about and it’s kind of pissing me off. We’re all Canadians FFS.

Having read all the data, the CRTC and I can conclude that people are using the internet more and more. And on a variety of devices. Your tax dollars at work.

It appears Anglos like the Internet slightly more than French. Maybe that means French are more into reality? Secondly Anglos love their I tunes, the French likely because the content is not there not so much. I see a French Music downloading app op.

not that Canadians should worry
http://boingboing.net/2013/10/04/silk-road-prosecution-how-doe.html

Forget the anglo/franco comparaison. What about the colors they picked for the charts? WTF is THAT all about?

I like the fact, as you stated, that tax dollars paid for a conclusion that we all knew would happen. And hey, I DO work hard. ;)

I guess red for anglos and blue for francos would have been too obvious? But yes that color scheme, ugh