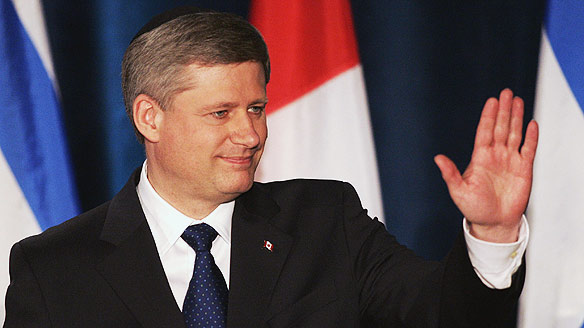 Yes this is Stephen Harper. That's the point.

On Friday (news dump day), the Conservative government announced their choice to replace Konrad “The Killer” von Finckenstein as head of the CRTC, starting June 18th. His name is Jean-Pierre Blais, and he’s… some guy. He’s a lawyer (ugh), and he has held high-level government positions at the Treasury Board, Department of Canadian Heritage, and even the CRTC itself. So, lifelong bureaucrat. Here’s the money blockquote from the article linked above:

Looks like Harper got himself a yes-man. Don’t get me wrong, this guy has experience in the CRTC and was its general counsel, so he understands the issues. Doing something about those issues that benefits the people of Canada instead of the giant media corporations? Well, we’re gonna have five years of this guy to answer that question.

I need to be regulated

All Hail King Steve.
I foresee Canadian Media open to foreign investment. Which is code for lets replace the CBC news with FOX.

Talk about a news dump, I am getting this news from your blog, Nothing to see here folks.

Oh FFS. Is there any length this government won’t sink to?

You have to wonder what Ray Bradbury would have said about this bill. I opine likely against
http://thinkingaboot.blogspot.ca/2012/06/ray-bradbury.html