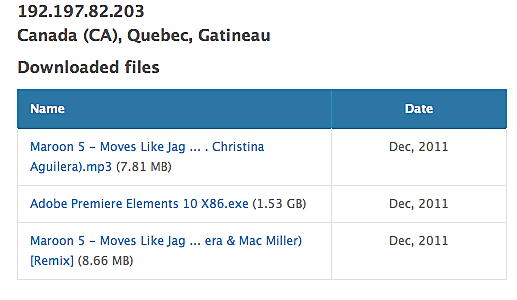 I should probably just retype everything I wrote last week from the Congress post, because it’s the exact same deal. Taking a page from Torrentfreak, the Pirate Party used the website You Have Downloaded to track some IP addresses from Parliament and see if they have downloaded via torrent. Jackpot!

I’ll remind you that IP addresses are strings of numbers that identify every computer or device on the internet. You can verify that the IP address above (192.197.82.203) belongs to Parliament by entering it in this box on this page. You get a result that the address belongs to the domain parl.gc.ca. Naughty, naughty!

I’ll also remind you that we have no way of knowing who exactly it was at Parliament doing the downloading. Could be anyone. Industry Minister Tony Clement, who is responsible for Bill C-32? The dude I know who works as a page? Senator Jacques Demers? The janitor? This is the same problem that exists when media companies use an IP address to sue someone. Now I’m really repeating myself from last week.

Well this time I am going to assume the downloader was Stephen Harper. Who else would like Maroon 5 that much?

tap of the gavel to reader moeman for the tip

Gatineau, eh? It’s probably someone at the Museum of Civilizations. Maroon 5 is a recurring theme in their latest exhibit: “Great civilizations and the downfall thereof”

If allenmendelsohn.com had a “comment of the week / month / year” feature this is the winner

I was trying to be diplomatic?

I know Al, just mucking things up. For fun.

No NIckelback, oh I forgot they get that for free, this legislation powered by Nickelback.

Keeping with the repetitiveness theme : WOW.